The improvement of working memory, problem solving ability and planning thinking play a central role in cognitive rehabilitation therapy approaches (source: Guideline on executive dysfunctions of the German Society for Neurology and the Society for Neuropsychology). They are particularly suitable for patients with cognitive deficits with only slight behavioral problems.

With these therapeutic approaches, the type of intervention can be structured well and can be carried out in both group and individual sessions. According to ICF terminology, the goal of cognitive training methods is to change body structures and functions with their physiological and psychological functions. Here, repeated cognitive training triggers neural plasticity processes (Belleville et al., 2011; Engvig et al., 2012; Takeuchi et al., 2011; Takeuchi et al., 2015), which are accompanied, among other things, by corresponding changes in neurotrophins can (Angelucci et al., 2015; Gunstad et al., 2008; Vinogradov et al., 2009).

With this exercise program, the above Skills practiced.

Due to the auto-adaptive structure of the task, the training is easy to learn for those affected and quickly adapts to the level of performance of the trainee.

In the high levels of difficulty, dates for planning should be kept in mind. This promotes an improvement in working memory performance.

The activities are linked to certain time conditions. These are displayed in a window when the user clicks on the appointment symbol. From level 5, there are grayed out time fields that cannot be filled with an activity.

In higher levels of difficulty, appointments are strewn that are bound to another appointment. These appointments must always occur together within a task.

You can move back and forth within the time fields. From level 7 it is possible to fill a time field with 2 appointments and to occupy two time fields with one appointment. From level 13, a defined number of appointment fields can only be called up once. This information should be memorized and taken into account for further planning. 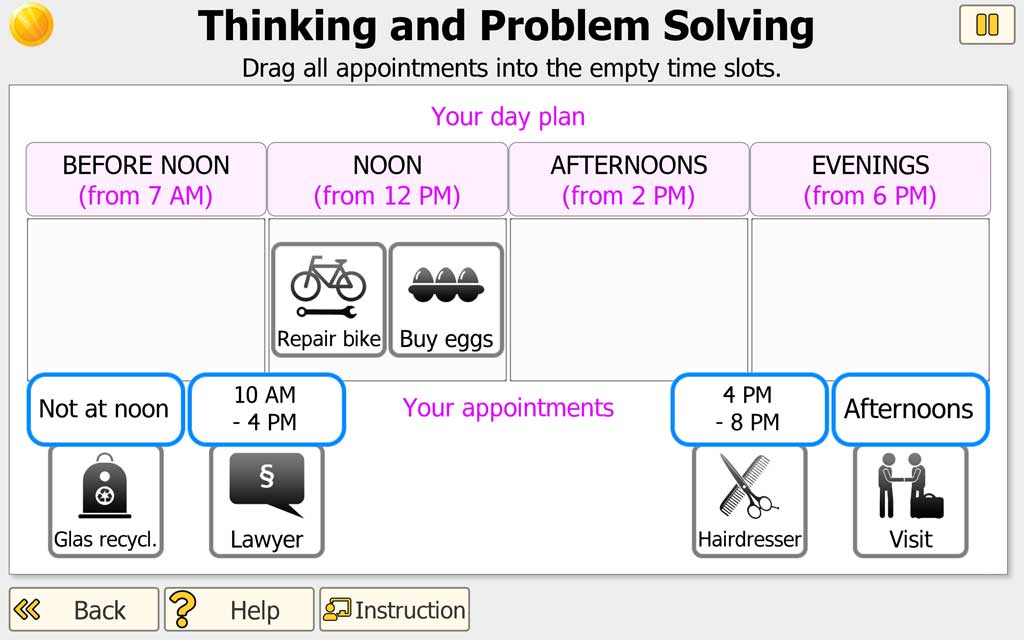 In the start window for all therapy programs select the “All exercises” area, here the “NEUROvitalis” tab. Click on the training exercise “Memory – Vita Mem”.

A window appears for selecting the level of difficulty and the duration of the training.

So that the exerciser does not overwhelm himself, the training begins with a low level of difficulty. All other levels are locked with a lock, which must be opened by completing the previous task.

If a therapist wants to skip levels of difficulty, he can switch on the “Therapist can start all levels” option in the “Patient -> Edit” menu.

In general, 20 minutes of training is recommended. A too long training session leads to a loss of attention, the patient makes mistakes and becomes frustrated.

For severely affected people, the training duration should e.g. reduced to 10 minutes (attention span). In this case, several sessions a day make sense.

The therapy progress is saved automatically. A new session continues with the difficulty in which the last session ended.

The “Results” window offers various views of the course of therapy (button at the bottom of the “Therapy modules” window).

Back to the NEUROvitalis overview…